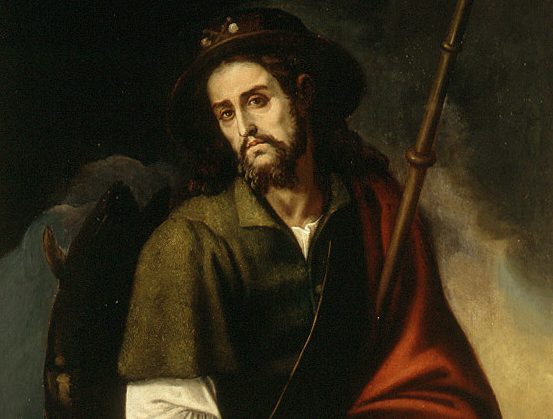 Roch was born in France and at the age of 20 Following the death of his parents, he traveled to Rome where he dedicated himself to caring for victims of plague Many cures were attributed to his care and prayers Roch himself contracted the plague and never recovered One legend tells us that Roch wandered into the forest, planning to die there alone He was befriended by a dog who kept him alive by bringing him food taken from his master’s table When Roch returned to France, he was imprisoned by an uncle who didn’t recognize him He died in prison at the age of 30 His identity was discovered only after his death Roch became one of the most popular saints in Western Europe and is honored as a miracle worker He has often been invoked during times of plague Saint Roch is often depicted dressed as a pilgrim, with a walking staff, broad brimmed hat, and a pilgrim’s shell (a symbol of the pilgrimage to the great shrine of Saint James in Compostela, Spain) Roch’s dog is also a common element in images of the saint from The Roman Missal – Common of Holy Men and Women – For One Saint S

Blessing of the Pets next week! ... See MoreSee Less

In honor of the Feast of St. Francis Assisi, we will host a Blessing of the Pets this Tuesday, October...
View on Facebook
· Share

We are requesting donations of candy for our All Saints Day celebration. If you would like to help out, please drop candy off at the parish office by October 30th. Thank you! To learn more about All Hallow's Eve and our celebration, please click the link below! ... See MoreSee Less

Halloween, or all hallows (saints) eve, is a controversial subject for some Christians, but shouldn’t be. Although appropriated by secular...
View on Facebook
· Share